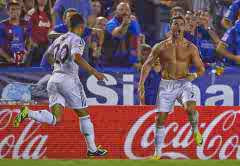 rnold Schwarzenegger has confessed himself an admirer of Cristiano Ronaldo, declaring the Real Madrid forward to be in "spectacular" shape.

Ronaldo has been in excellent form so far this season, scoring 12 in ten games for los Blancos in all competitions, though his side are third in La Liga and five points behind both Barcelona and Atletico Madrid.

"He has a fantastic physique," said the Predator star.

"He has some great abs - he looks spectacular. He looks to be in great shape, so it is clear he's a great footballer."

The 66-year-old Hollywood star, who rose to fame with leading roles in films such as Conan the Barbarian and The Terminator, was also asked if Ronaldo had what it took to compete against him in the prestigious bodybuilding competition Mr Olympia - a title Schwarzenegger has won seven times.

"I don't think he'd be interested in competing in a Mr Olympia," said the former govenor of California, laughing off the question.

"He is interested in being the best player in the world. I was interested in winning the Mr Olympia title. They are two different sports, but there is no doubt he is in great shape."