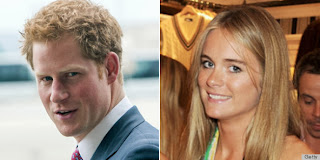 If you take your girlfriend to a James Blunt concert and a showing
of "The Book Of Mormon" in one week, does that mean she's The
One?
That's what the British press seems to think. A new report from
the Telegraph goes on the record about Prince Harry and
girlfriend Cressida Bonas, quoting one of Cressie's friends:
"Cressie is going to marry Harry."
According to the Telegraph's source, "Harry never stops talking
about marriage and children, and she has now got used to the
idea. The wedding is likely to take place next year."
So it's a race to the altar between Pippa Middleton and her beau,
Nico Jackson, and Pippa's royal brother-in-law and his future
princess bride. Both have been dating for about a year, but Harry
has been quite explicit about his desire to settle down. In a CBS
interview in 2012, Harry admitted, "I mean look at me, I'm 27
years old," lamenting it was difficult to date as a prince: "[I'm]
not so much searching for someone to fulfill the role, but
obviously, you know, finding someone that would be willing to
take it on."
And he seems to have found it with 24-year-old Cressida, a
blonde dancer whom he's been seeing since last summer. Photos
of them getting cozy on the skip slopes made it official in
February 2013, and the pair attended a wedding together in June
2013 -- what's more couple-y than that?
Buzz about Cressie being The One has been growing louder
recently, with Tatler putting her on its October 2013 cover with
the headline, "Harry Loves Cressie." Now the Telegraph reports
that 29-year-old prince has actually been pushing hard for a
wedding, to the point where "Cressida has been in floods of
tears." One friend reportedly told the Telegraph,
"Harry is coming on very strong, but she is all over the
place. She thinks she is far too young to get married and is
scared by all his talk of marriage and settling down."
But it seems the pair are getting more comfortable with the idea.
Will we have a royal wedding by the time Prince Harry turns 30
next year? We've got our fingers crossed.

Read more from the Telegraph.