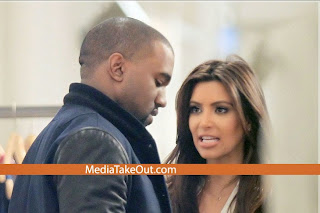 According to he NY Daily News Kanye West proposed to
Kim . . . but she TURNED HIM DOWN. Here is what they're reporting:
With two ex-husbands already under her belt, Kim Kardashian is in no rush
to walk down the aisle again but baby daddy Kanye West is pressuring the
reality star to tie the knot. "Kanye is obsessed with her," a source close to
Kim tells us. "He always has been. He has begged her to get married a few
times, it's Kim that's saying 'not yet.' "
Our insider says that momager Kris Jenner is terrified that if Kim doesn't
say yes soon, it will look bad for the family, and that with a baby, it would
look better if she was married. Jenner is also warning close friends that
this go around will not be a huge, televised affair, like Kim's disastrous
wedding to her 72-day husband, Kris Humphries.
"This will be a small, private event," the family friend tells us.
We believe this report. We spoke to a TOP INDUSTRY INSIDER who told us that
Kanye West has been MADLY IN LOVE with Kim for years . . . but Kim ain't really
feeling dude like that.